Why would we need WikiLeaks after all?

Now, the information and conclusions below don’t necessary reflect the actual state of things and in no way represent true events and situations. It was taken out of context and merely collected from pieces. All of this is just a creation of my conspiracy theory. Don’t read it.

What I can take out of this…. A company founded by ex mercenary provider, today a British dandy sailor is one of the first to get Kurdish license to drill for oil on their land, somewhere in 2007, just after occupied Iraq has finally came to some order and established the puppets not killed daily. Needless to say that getting to that land is hardly possible without a safe passage, it is landlocked between Turkey, Iraq and Iran. In 2009 they get to the first oil, in 2011 they get a lot of gas. Making a cheap source of  combustive materials flow to western world. Some money will go to locals, but we all know how it works in developing (and not only) countries. Happy workers in the new president villa. The point? Most disturbing of this for me is who gave him the money, the sources are hidden in large and small private investment management companies. And this should be a lot of money. Why do I care? I don’t care a s**t about democracy and stuff like that, that is a myth, a fairy tail told to you by who holds the power (the wealth). What I do care about is the people are dying and suffering for some others purse sake. And too many of them believe that they do that for their own good. Which is mostly true but looks too much familiar… just the way religion does…

Anyway, I’ve just spent an hour looking how much of conspiracy can be behind small news on bbc.co.uk…. It appears that there is more to dig, like some JPMorgan deals with Heritage and stuff like that but I’d prefer to “get myself a life” 🙂

Heritage Oil (LON:HOIL) , the FTSE 250 oil and gas group, surprised shareholders today with news that its Miran West-2 well in the Kurdistan region of Iraq had made a major gas discovery – possibly the largest in the country for 30 years. Heritage had been expecting the well to deliver an oil discovery, helping to firm up its estimates of contingent and prospective oil resources on its 75%-held Miran block to 1bn barrels of oil equivalent. As it is, the company has revised those figures down to 744m barrels. As a result, the Heritage Oil share price dropped by nearly 17% to 363.2p.

Heritage Oil Limited (Heritage Oil), an independent upstream exploration and production company, announced oil discovery in the Kurdistan region of Iraq and the completion of an initial test programme on the Miran West-1 well. Miran West structure estimated oil-in-place of between 2.3 to 4.2 billion barrels. 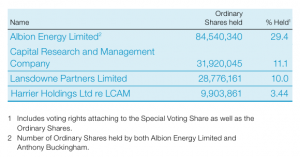 Anthony Leslie Rowland “Tony” Buckingham is a oil industry executive with a significant share holding in Heritage Oil Corporation. Heritage is listed on the Toronto Stock Exchange since 1999. Recently Heritage listed on the London Stock Exchange. Mr Buckingham’s direct and indirect share holding is estimated to represent 33% of Heritage. This share was reduced in November 2007 via a share placement made through JP Morgan and Canaccord.
Mr Buckingham is a former partner of the mercenary provider or private military company Executive Outcomes.[1] He has had no involvement with such organizations since 1999 and has focused his time on running Heritage.
Tony Buckingham, the current CEO and major shareholder of Heritage, has led the company through major exploration finds, including the hydrocarbon system in Lake Albert, Uganda and the M’Boundi oilfield in the Republic of Congo. This positive track record should continue as a result of the recently awarded licenses in the Kurdistan Region of Iraq and Mali.
Tony Buckingham is an avid and accomplished sailor, competing on behalf of Great Britain on many occasions. He has won many trophies at prestigious regattas including Cowes Week and notably won the prestigious Commodores’ Cup in 2000.

The Capital Group Companies is one of the world’s largest investment management organizations with assets of around one trillion USD under management. It comprises a group of investment management companies, including Capital Research and Management, American Funds, Capital Bank and Trust, Capital Guardian, and Capital International. As measured by assets under management, Capital rivals Fidelity Investments, a figure the company will not confirm because it eschews publicity.[1] The firm was founded in 1931 by Jonathan Bell Lovelace.

The Capital Group Companies is one of the world’s largest investment management organizations with assets of around one trillion USD under management. It comprises a group of investment management companies, including Capital Research and Management, American Funds, Capital Bank and Trust, Capital Guardian, and Capital International. As measured by assets under management, Capital rivals Fidelity Investments, a figure the company will not confirm because it eschews publicity.[1] The firm was founded in 1931 by Jonathan Bell Lovelace.
Posted in: politics