TL;DR: For me, this product delivers the advertised value and I wouldn’t bother to write this post otherwise.

Preamble, or why I bought it.

Nexus 5 is my first smartphone with non-removable battery. So before I’ve decided to buy it, I did my best to track back the situations in last two years that I had to change an empty battery of my HTC Sensation. The result was that I did that very rarely and most of the times it was during traveling or outdoors activities that involve filming stuff and bad signal. On a normal day I almost never had a discharged phone when I needed it. So I weighted my options and decided that the worst case, I’ll have a rare inconvenience of external battery connected with a cable and the best case I’ll have the battery case (here and further on the pun is intended). Naturally, I’ve started looking for one as soon as I got the phone and there was only one announced at the moment, from i-blason, at $60 or something. But at this price (compared with the cost of a case + an anker batterry, naturally) I wanted value. The value in this accessory for me is its convenience, its functionality. Now this comes from matching of what I need and what the product does, right? What I need is this: I need a battery that keeps the phone being usable. Worst case of it is using the phone for navigation on the bike. Given that Nexus 5 is a hungry beast with 1.2A charger, it didn’t take long to discover that my 1A rated USB socket on the bike doesn’t keep it running. When Nexus 5 is running navigation, 3g/2g, GPS and is on full brightness, it just drains more than 1A from the battery and the battery is not being charged fast enough to keep up with it. Literally, I’ve got about 2 hours of GPS/3g/Full Brightness out of Nexus before it died on the bike. So the battery output amperage was the main concern. This in turn meant that i-blason battery case was not the case for me with advertised 500mA output. Which may work for someone else who needs the juice while the phone is in the pocket. I’ve refused the temptation and decided to wait a little for the market to come up with an offer. And here we go, recently kickstarted Limefuel promises to deliver a Nexus 5 battery case and says the output will be 2A. Now we are talking. And after a month of waiting I’ve ordered via Amazon. The shipping times turned to be a never seen before wonder, beating both Amazon’s and FedEx’s own estimations the box arrived in one week (seven days) from Boulder, CO to Italy. And here we go.

Starting from the packaging and down to the included cable, s28n5 transmits the feeling of quality. Looking at what I’ve bought I don’t feel I’ve overpaid a cent. The plastic (the same “soft touch” feeling you have on Nexus 5) doesn’t feel cheap, the cuts and buttons are precise and accurate all gets in its place and clicking the two parts close doesn’t make you think it’s going to break. It even feels like a decent level of protection against accidental falls, winch is a good thing considering the added size and my clumsy hands. Sure, the elegance of the phone is nowhere to be find with the case on and it is basically a brick now but this is to be expected in this situation. I like it, really. Feels vintage in the pocket, sexy and dangerous in hand 🙂 It certainly doesn’t hurt the mobility of the device as far as you wear normal pants or jeans.

But what about my requirements then? I don’t have a scientific method to measure and because of the wettest winter in 20 years I’d better not go motorcycling for hours now. So I’ve charged the case and the phone and tried to simulate with: 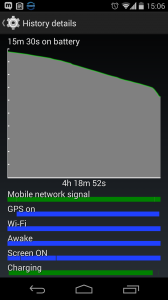 I actually felt sorry for the poor phone. All loaded I’ve started from 97% of battery at 11:10 and the case ran out of juice at about 15:00 giving up after about four hours of heavy lifting. Sure, the phone’s battery was discharging but at MUCH slower rate, look at the right end of the graph here, this change is when the case stopped charging and the phone’s battery started to discharge under the same load but at its own.

This,for the moment, leaves me with only one noted downside, the charging time. With the original Nexus charger it took 6 hours to charge the case with its reported 1A input drain. Should I buy two cases just in case?