A really nice page that shows in numbers who Canonical ( the company behind Ubuntu Linux driven by Mark Richard Shuttleworth, for the rest of us ) really is. Or at least it is my last argument in hating the pathetic distribution that sucks life essence from GNU/Linux.

I’ve been always saying Ubuntu is a pure damage to the free software movement, it is worse than microdoft, novell, oracle and whatever you can bring up from googling linux. The most terrible thing ever.

100 patches to kernel in 5 years. Now, who this company is? exploiter. Period. 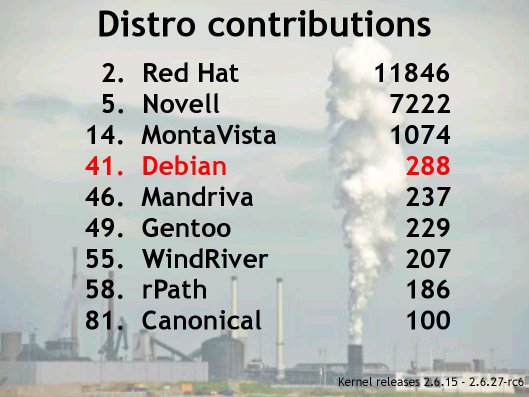 That is a normal tactics to catch the train in commercial world. Good job Mark. Great Business Canonical. Community? sure, scared newbies who don’t know what’s the difference between Linux and Ubuntu desperately looking for My computers icons or whatever they had on their Redmond powered boxes. PR? Popularization? give me a break. Ubuntu looks like shit, (does not) works like shit and you know what was the conclusion I’ve got to with a couple of my friends? That Canonical is either a microdoft or aple  spread that is targeted to destroy Linux as desktop platform. I still hope that was a result of logics lacking facts, but it seems so true….

Please, support the contributors, support the ones who creates and not resells, not exploiters. Remove that stinky ubuntu and install something from the top of the list.

Thank you for reading.